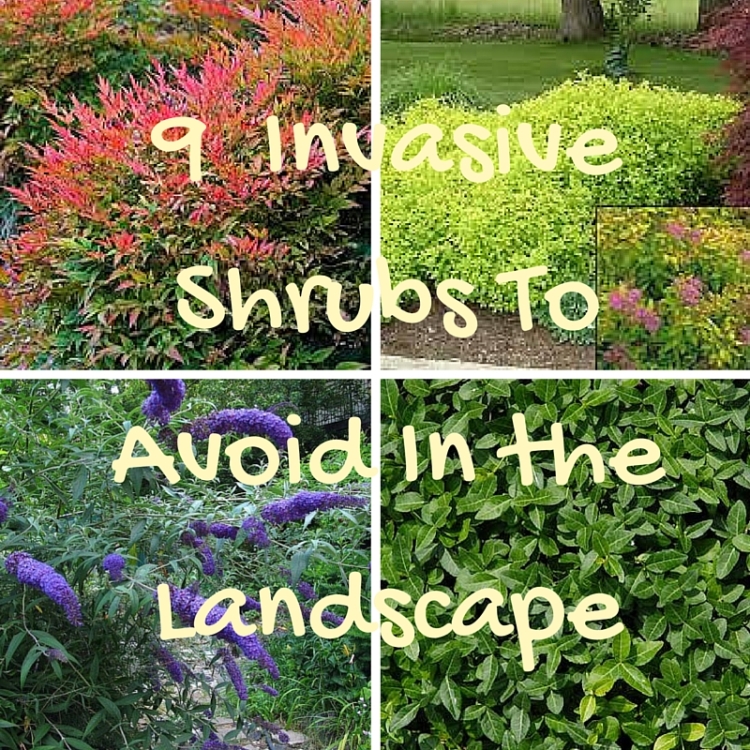 You may have read about 4 Bad Invasive Trees To Avoid in the Landscape a few weeks ago on my blog. This time I’m going to focus on some bad invasive shrubs we should avoid in the landscape. All of these shrubs began their time in America being sold as ornamentals. Many are still sold at garden centers, so it’s worthwhile to be knowledgable about these species and to say ‘no’ by choosing where your powerful dollar will go.

These shrubs in some ways are more detrimental than the invasive trees. Invasive shrubs seem to spread and take over even easier, and can overtake both native perennials and trees in a natural area. As you may have noticed with the trees and their origin, all of these are native to parts of Asia. Our soils and climate in America is much different than it is in Asia. This somehow makes these species act differently in our environment, allowing them to thrive and become a nuisance.

A lot of us have probably heard of Honeysuckle. There are two kinds, the Bush Honeysuckle and the Japanese Honeysuckle which is a vine. I most often see the Bush Honeysuckle. I became well aware of this toxic shrub while growing up. My neighbor intentionally planted it along her chain link fence for privacy. (I thought we were good neighbors!) My mom and I would spend hours every summer cutting away at it. The neighbor planted it right against the fence and it grew heavily into our yard, making it look really bad and killing the grass. It would grow right back, our efforts defeated.

Many know of these type of lost efforts. Honeysuckle is a constant battle. It seeds readily. It’s berries are like twinkies for birds, nothing but sugar for them. It’s allelopathic, which means it contains chemicals that prohibit anything else growing around it. This chemical is in its roots, stems, and leaves. This is destructive in two ways; it not only prevents our native plants thriving along with it, but it means there is nothing to grow by the honeysuckle, except more of it. This is why you often only see Honeysuckle throughout an area with a bare floor. 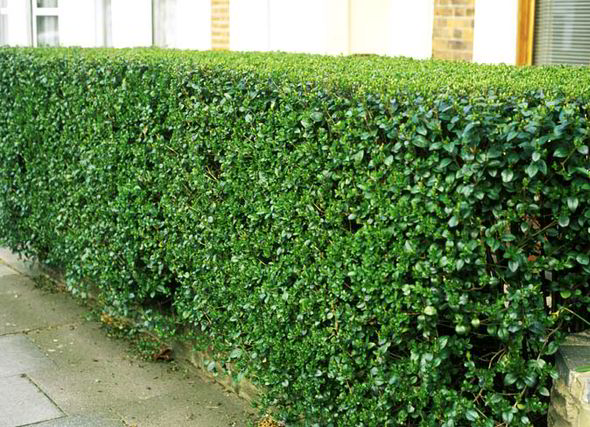 Privet is a pretty aggressive and large shrub. You could see a lot of it being sold as an ornamental shrub in garden centers. I’m sure people are still selling it somewhere. You often see it now established as hedgerows. Because it grows up to 30′ tall, many people planted it as privacy screens, and would sheer it down into a hedge. However, this shrub spreads and forms dense colonies. You will often see hundreds of sprouts all around them, which means you aren’t just going to have one, unless you’re diligent about maintaining its aggressive spread. Help control its spread by collecting its berries (which aren’t that great for birds anyway).

Also called ‘Heavenly Bamboo’, it’s used in the landscape for its bamboo like appearance and it’s colorful hues. While I think its color is pretty, it’s not meant for our landscape. I’ve found it jumping from my client’s neighbors house into her garden and growing quickly. It is invasive and threatens drowning out our native species. Here in Kentucky, a lot of nandinas have taken a big hit due to the harsh winters we’ve had leaving them looking bad. They also get pretty unruly (and I think unattractive) once they get tall. Another reason to omit it from the landscape, its berries are poisonous to birds and makes them get sick.

Also called ‘winter creeper’; an appropriate name because it is pretty creepy. Another one at the top of the list of how bad of an impact it is having in our landscape. In some wooded areas, you can see it completely taking over the ground. It also climbs up trees, suffocating them and creating rot. Its roots grab onto the tree, which makes it nearly impossible to remove once it becomes a certain size. Its vines also reroot as it crawls over the ground. It is a quick grower. Along with honeysuckle, this is a shrubby vine that nature preserves and protected forests areas have to battle too. I also still see it being sold in nurseries, often the big box garden centers. There are variegated varieties, with yellows and whites bred into them. While I haven’t seen these be as invasive (yet), I don’t doubt they will become invasive just like their common variety. These shrubs still become quite aggressive and large in the landscape. I would suggest removing it if you do have one. There are some native varieties of euonymus that are very pretty and have much more interesting features.

This is a common shrub that seems to be all the rage when you visit garden centers, especially those big box ones. They’ve been bred into different varieties. They can have a pink or white flower in spring or early summer. But, again, they’re on the invasive list. I can account and have seen its invasiveness. One of my clients had one that sent thousands of seedlings across her landscape. Thankfully, she had us remove it and we put in a dogwood! Not only do these spirea create havoc on keeping weeds out of your garden, but they’re also a lot of maintenance! They often have a lot of dead growth every year that has to be pruned out. They also have numerous stems, making it a timely and arduous task. You can cut them to the ground which will save a lot of time. They will, unfortunately grow back just as well. There are other native shrubs that are a great replacement for spirea.

In Kentucky, I haven’t noticed barberry being invasive, but it is in other parts of the country like New England. I wouldn’t doubt that it will become more invasive here over time. Who would want an extremely sticky and spikey shrub to be invasive!? I guess the only benefit of barberry is that it is sticky, and some people like that as a home security feature under their windows. I don’t know a replacement for that reason but roses or a berry patch, but Virginia Sweetspire and New Jersey Tea are beautiful small shrubs that are great replacements for their color and interest.

Many people like butterfly bush because of the numerous pollinators it attracts. But…it does spread. While it is food, it’s not the best type of nectar for our pollinators. The best nectar is from our native plants are going to have the right amount of nutrients. I’ve also noticed because of our harsh winters, some have not made it due to the low temperatures. There are many native shrubs that will attract lots of pollinators, such as button bush.

I used to have three forsythias in my yard until this summer. Then I realized that I was about to have four of them. They’ve made it on the invasive list and for this reason. Forsythias will sprout on their own and form a new plant if any of their stems touch the ground. This past spring I noticed that they didn’t even get blooms on them! I noticed this around Lexington as well, many did not bloom this year. Forsythias become large shrubs, and may need trimming if they’re not in a big enough area to spread. Witch hazel, Shrubby St. Johns Wort, and native Fothergilla are great replacements if you’re looking for yellow. 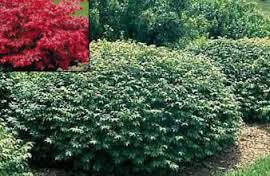 In Lexington, I often sees rows and rows of Burning bush along property lines, especially around neighborhood fence lines or churches. Burning bush is another type of euonymus that is not native. They are hardy to very harsh conditions, but so are some native shrubs! Such as our native viburnums and hazelnut for example. Virginia Sweetspire gets great fall color. 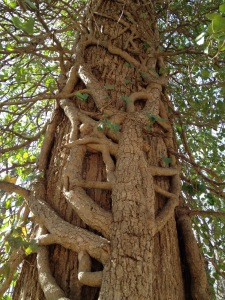 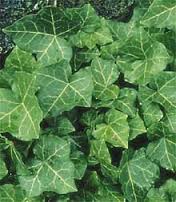 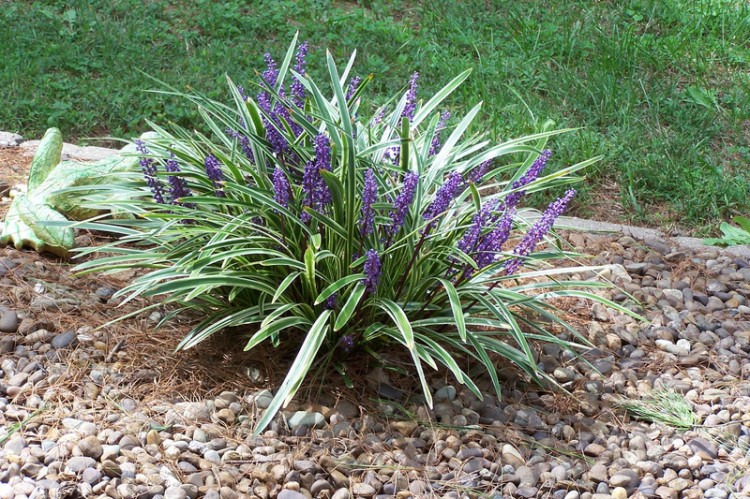 2 thoughts on “9 Invasive Shrubs to Avoid in the Landscape”